More evidence of the need for academics, scientists and others to review their slavish addiction to traditional presenting

Regular readers of Presentation Magic, and more certainly attendees of my workshops, will know of my emphasis on understanding the active ingredients of making presentations engaging, memorable, and persuasive.

To do this, I enlist my training and experience in the cognitive and affective neurosciences (how the brain forms the substrate of our thinking and emoting) to illustrate to audiences how to do the walk and the talk.

As such, I’m always on the lookout for evidence that my theories of presenting hold water. This is in stark contrast to most trainings in presentation skills which either focus on the mechanics of software use, or design theory.

Both of these are necessary but insufficient aspects of presentation skills, and I prefer to acknowledge their utility, but go beyond – way beyond in satisfying my audiences, who usually pay well to attend and hopefully learn something they can immediately apply. 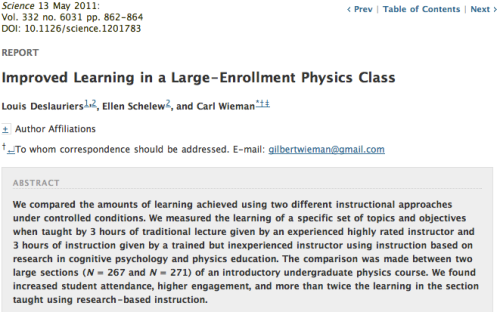 Essentially, the authors compared two styles of teaching introductory undergraduate physics to two groups of more than 250 students each.

One group received traditional lecture-style instruction, and without yet receiving the original publication from the authors (a request has been submitted), I can only assume it was the traditional Powerpoint style of information presentation together with white or blackboard live instruction as well as experiment procedures or multimedia.

The second group used as its medium something I’ve been referring to a lot with both my patients and professional groups (like commercial airline pilots), which is the concept of deliberate practice.

If you’ve read Malcolm Gladwell’s Outliers you’ll recall he refers to the length of time it takes to reach expert status (10,000 hours), and how it is best achieved through this concept of deliberate practice.

The Times, in reporting on the article, offers a link not to the original article, but to ScienceNow article at sciencemag.org by Jeffrey Mervis.

Let me offer you a quote from that piece which helps illustrate the concept of deliberate practice as applied by the researchers:

The research, appearing online today in Science, was conducted by a team at the University of British Columbia (UBC), Vancouver, in Canada, led by physics Nobelist Carl Wieman. First at the University of Colorado, Boulder, and now at an eponymous science education initiative at UBC, Wieman has devoted the past decade to improving undergraduate science instruction, using methods that draw upon the latest research in cognitive science, neuroscience, and learning theory.

In this study, Wieman trained a postdoc, Louis Deslauriers, and a graduate student, Ellen Schelew, in an educational approach, called “deliberate practice,” that asks students to think like scientists and puzzle out problems during class. For 1 week, Deslauriers and Schelew took over one section of an introductory physics course for engineering majors, which met three times for 1 hour. A tenured physics professor continued to teach another large section using the standard lecture format.

Unable to tell you quite yet how this teaching was actually carried out, the ScienceNow article alludes to a much more interactive, problem-solving method, rather than, “here are the facts I want you to remember and regurgitate for the test.”

If you’ve attended a Presentation Magic workshop, you’ll know how much interactivity and playful questioning I employ to eventually lead you to inescapable (and thus memorable) conclusions.

What were the results of the experiment? Once more, ScienceNow:

The results were dramatic: After the intervention, the students in the deliberate practice section did more than twice as well on a 12-question multiple-choice test of the material as did those in the control section. They were also more engaged—attendance rose by 20% in the experimental section, according to one measure of interest—and a post-study survey found that nearly all said they would have liked the entire 15-week course to have been taught in the more interactive manner.

This is quite a contrast to the excuses I hear from academics who struggle with the extra work my way of instructing asks of them, who tell me their students want them to lecture by Powerpoint because it helps them. My reposte is that it helps the students to slacken off, and that it’s not the students’ responsibility to tell lecturers how they best learn, but to be informed by experts in their field how to best take on board their profession’s means and methods.

In thinking about the outcome, the senior researcher was quoted:

“It’s almost certainly the case that lectures have been ineffective for centuries. But now we’ve figured out a better way to teach” that makes students an active participant in the process, Wieman says. Cognitive scientists have found that “learning only happens when you have this intense engagement,” he adds. “It seems to be a property of the human brain.”

Jere Confrey, an education researcher at North Carolina State University in Raleigh, said the value of the study goes beyond the impressive exam results. “It provides evidence of the benefits of increasing student engagement in their own learning,” she says. “It’s not just gathering data that matters but also using it to generate relevant discussion of key questions and issues.” She also notes that “the attendance results remind us of the importance of providing the right opportunities to learn.”

The Times article by Benedict Carey here casts some doubts on the enthusiasm of some who’ve witnessed the published outcome and reasoning:

Yet experts who reviewed the new report cautioned that it was not convincing enough to change teaching. The study has a variety of limitations, they said, some because of the difficulty of doing research in the dude-I-slept-through-class world of the freshman year of college, and others because of the study’s design. “The whole issue of how to draw on basic science and apply it in classrooms is a whole lot more complicated than they’re letting on,” said Daniel Willingham, a psychology professor at the University of Virginia.

Dr. Willingham said that, among other concerns, the study was not controlled enough to tell which of the changes in teaching might have accounted for the difference in students’ scores…

Experts said, too, that it was problematic for authors of a study to also be delivering the intervention — in this case, as enthusiastic teachers. “This is not a good idea, since they know exactly what the hypotheses are that guide the study, and, more importantly, exactly what the measures are that will be used to evaluate the effects,” said James W. Stigler, a professor of psychology at the University of California, Los Angeles, in an e-mail. “They might, therefore, be tailoring their instruction to the assessment — i.e., teaching to the test.”

I urge you to read both these sources if you are tired of your current attempts at knowledge transfer and think about shifting from a traditional, socially-normed means of presenting to something more evidence-based.

It’s an irony that when I apply to psychology conferences to present my work on presentation skills (I’m appearing at the APA Convention in Washington DC in August employing presentation magic to explore IT for psychologists) I advocate that psychologists value their evidence base to convince governments and insurers of their evidence base. But when they present their research, they conform to Powerpoint standards of information delivery: distinctly unscientific.

Thus I’m amused to read the conclusion of the Times article, where finally, a psychologist “gets it”:

Either way, Dr. Stigler said, the study is an important step in a journey that is long overdue, given the vast shortcomings of education as usual. “I think that the authors are pioneers in exploring and testing ways we can improve undergraduate teaching and learning,” he said. “As a psychologist, I’m ashamed that it is physicists who are leading this effort, and not learning scientists.”

(Coda: If you are intrigued by the concept of deliberate practice applied to various professions, the text of choice is that edited by the doyen of the field, Karl Anders Ericsson, entitled Development of Professional Expertise: Toward Measurement of Expert Performance and Design of Optimal Learning Environments, available at Amazon here.)

This entry was posted in Powerpoint, Presentation Skills. Bookmark the permalink.

2 responses to “More evidence of the need for academics, scientists and others to review their slavish addiction to traditional presenting”