Those of you who’ve been following my treatises on presenting or who have attended a workshop I’ve conducted on presentation skills, will know the emphasis I place on story telling.

I’m certainly not alone in this endeavour, and others like the Heath brothers have talked about the importance of story telling in their recent book, Made To Stick.

I’m always trying in my workshops to come up with new ways to persuade people of the importance of letting each slide become part of the overall story you’re telling, be it to sell ideas or goods, educate and inform, or brief an audience on your current research. And that each slide in its own way has a story to tell, or at least assist you to tell.

At Macworld 2008 where I presented on presentation skills (evaluation form available if you want to see it courtesy of IDG Macworld), I had planned to introduce a few new slides to illustrate to the audience, by involving them in a “theatre of the mind” activity, just how important story telling is in our world.

But I pulled the slides the night before because of worries over copyright, once I knew my presentation would be recorded. They were to be clips from well-known movies which were to illustrate my point, but being unsure of what constituted “fair use” in the USA I pulled the slides.

Later in Australia only a few days after returning from the US, and with no possibility of my all day workshop being videod, I included the slides, to great effect.

Here’s what I was trying to do.

Over several slides, I showed excerpts from films important to me, covering more than 40 years of filmgoing. Some of the actors in the clips were still alive, some had already passed on.

Not all in the workshop knew all the films, but most had seen some of them, enough to get my central idea of the importance of story telling.

I chose clips which were film highlights, perhaps even passing into common speech. But for this audience of mental health specialists, I let them know these clips told a lot about me, the presenter, because of what they all had in common. These clips illustrated not just memorable scenes, but collectively, they represented a peak in the story arc, an “Oh my gosh” moment where the story zagged into new narrative territory. These are scenes you wait to see again, even if you’ve seen the film many times. They are an emotional highlight.

Let me illustrate with some stills from the movies: 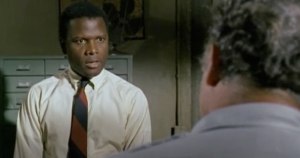 In this classic scene, Sydney Poitier is confronted by a Mississippi small town police chief, played by the late Rod Steiger. An industrialist bullding a new plant has been found murdered in the small hours of the morning, and Poitier has been taken in for questioning having been found waiting in the train station by Steiger’s deputy, and with more than a hundred dollars in his wallet. (This is 1967 after all).

Aggressively questioned by Steiger (who thinks he’s got his murderer standing in front of him) about where he got the money, Poitier tells him he earnt it, only to be rebutted with “Colour can’t earn that kind of money.” Asked what work he does to earn the hundreds of dollars now on the table, Poitier responds, “I’m a police officer!” Soon enough, Steiger discovers that not only is Poitier a “colleague” but he is Philadelphia’s finest homicide detective.

Later, after he’s seconded to the case against his own wishes, Poitier doesn’t hand over some FBI lab evidence he’s sent for. Steiger makes fun of his first name, Virgil. “Now that’s a funny kind of name for a nigger boy that comes from Philadelphia. What do they call you up there?”

To which Poitier replies with a phrase that becomes the title of a follow up movie, “They call me Mister Tibbs!”

A year later, the first of a franchise of science fiction films featuring the evolution of man to ape began when Chartlon Heston landed on a planet where the apes ruled, and humans were mute and experimented upon.

In one scene, Heston, playing astronaut George Taylor, is captured and taken to the centre of an adobe village where he is taunted by the local adolescent chimps. Mauled once too often, he screams to an astonished crowd, “Take your stinking paws off me, you damned dirty ape!”

But the scene I included comes at the very end of the film, where Taylor (Heston) has captured the Minister for Science, Professor Zaius, whom he thinks knows the answers to how the planet is the way it is, with simians running the show.

On horseback, armed with his rifle (of course), and local female companion, Nova, he confronts Zaius for the last time:

George Taylor: A planet where apes evolved from men? There’s got to be an answer.

Dr. Zaius: Don’t look for it, Taylor. You may not like what you find.

A minute or so later, as Taylor rides along the shoreline, he confronts the explanation for the planet’s situation. (I won’t spoil it for those who haven’t seen it). 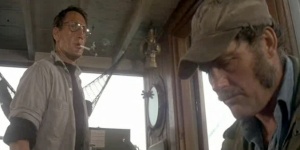 Several years later, Steven Spielberg took a rather unknown novel and turned it into box office gold, keeping people away from beaches for years.

In the scene I’ve chosen, the fish hasn’t been sighted, his presence known to the audience by a musical phrase which must be one of the best known after the opening sequence of Beethoven’s 5th symphony. Scheider, playing a small town police chief joins old shark hunter Robert Shaw and young rich scholar of things fishy, Richard Dreyfuss, out in open waters to hunt the shark down.

In the setup to the scene, Shaw is quietly repairing fishing nets, Dreyfus is playing solitaire on the deck, while Scheider is “chumming”, throwing out offal to attract the beast. When he does, he and the audience share in the frightening moment, with Scheider slowly backing into the cabin, not taking his eyes from the ocean, before uttering the words, “You’re gonna need a bigger boat!”

Almost ten years after the first manned landing on the moon, the general public had become a little jaundiced with NASA’s continuing Apollo launches. Mind you, some had put forward conspiracy theories that the landings were all faked, so taking this as a story plot, Peter Hyam’s film constructs a manned mission to Mars. But NASA’s budget has been cut to the bone, and so its director, played by Hal Holbrook, sets up an elaborate scheme to fake a landing and safe return, expecting the three man crew, played by James Brolin, O.J. Simpson and Sam Waterston to go along with the plan, for the good of the company.

When Holbrook suspects Brolin’s character, Colonel Brubaker, will not keep the secret, he unrolls plan B which will see the astronauts disappear. Breaking out from their desert-based Mars simulation, the astronauts escape in a sleek Learjet, only to crash land it in the desert when it runs out of fuel.

Each astronaut goes their separate ways according to the compass in the hope that one of them will make it back to tell their story. O.J. is captured first, while Waterston finds that his chosen direction takes him to a huge outcropping he’s got to climb. Exhausted and dehydrated, he begins the climb, telling himself a joke in the form of a long-winded story about how to to gently break bad news. As he reaches the punchline and the outcropping’s peak, he looks over the edge, only to find…

I won’t spoil it for you, but the camera pulls back from Waterston’s character and we get to see what he has just seen… and we know then that Brolin will soon become the last man standing.

An irony in the film is that Brolin’s character is eventually rescued by a journalist played by Elliot Gould who has been suspicious all long. Do you know the connection in real life between Brolin and Gould? (Hint: She’s a rather funny girl).

I had planned to show a scene from this film to 120 lawyers at a professional meeting on teaching presentation skills… but I chickened out. I was running short of time, having condensed a day’s workshop into an hour’s presentation, so decided to discard this sequence.

I wanted to say that presenters follow this mantra as if it was a commandment, but it’s a hoax, with no evidence to support it. In the film clip, Moses, played by Mel Brooks come down from Mt. Sinai carrying three tablets, of five commandments each.

But as he speaks, he drops one: “Here are the fifteen (drop, crash).. oy… ten commendments the lord gives us.”

I wanted the audience to equate this humorous piece with challenging “laws” of presenting which have no foundation.

And so, in my workshops where I use these clips, I ask participants to share with their neighbours films like these that have them pausing to watch and wait for their favourite scene, to emphasise the power of story telling, and how it’s so important to acknowledge when presenting.

Oh, and the title of this blog entry? A few weeks after I presented this workshop, Roy Scheider from Jaws died, then a few weeks later after another presentation, Charlton Heston died. I am hoping like crazy I haven’t put the mozz on any surviving actors in my slides.

UPDATE: September 28, 2008 – I had thought of including the famous scene in “Cool Hand Luke” where the prison superintendent, played by Strother Martin, says “What we have here is a failure to communicate.”

I include mention of it in this update to honour the passing of a true acting mensch, Paul Newman, on September 26.

What are your favourite scenes you would use if you were running a workshop like mine?

This entry was posted in Presentation Skills and tagged Keynote, presentations, story telling. Bookmark the permalink.

3 responses to “Are my Keynotes killing Hollywood’s senior actors?”