Will a Keynote-capable Apple tablet cause a paradigm shift in how presentations are given?

Rumours of an Apple tablet-based form factor have been circulating for years now, ebbing and flowing like the tides. When Apple released the iPod Touch, the rumour mill wound up again, as users and pundits alike wondered how easy it might be to see a new platform develop, not with desktop-style applications, but apps. available on demand from the iTunes App Store.

The success of the iPhone/iPod Touch as a mobile platform, rather than as respectively, a cell phone and music player, means that many users will come to see these devices as multi-purpose, and set expectations for even more capability as the products further mature and gain wider acceptance.

The iPhone/iPod Touch family are becoming the Swiss Army knife of mobile technology: supremely capable devices for specific purposes which don’t try to be something they’re not. You can cut through many things with the Swiss Army knife scissors and knives, but you wouldn’t use them to cut down trees.

Apple will release a tablet to the market place not because it can produce one – heaven knows, if any company can make such a device, it’s Apple – but when it has  identified an unmet desire or it can create a new market which is embedded with consumer desire.

In other words, either the marketplace exists but is until now poorly serviced with brain-dead products leading to consumer unhappiness – such as the cellphone business which was deemed “mature” and “impenetrable” by so many pundits – or Apple creates something new. Not something left field new, which causes people to say “Where did that come from?”, but new, as in “Why didn’t I invent that” or “Of course! It’s so obvious!”

An Apple tablet, as expected as it is, and later to market than PC tablets which are really Windows-based warmed over laptops, will only come to market when it can do what PC tablets can do, but do it with panache, desirability, and end user delight. Like the iPhone/iPod Touch twins, it will have multiple purposes, including all the features bar the cellphone features of the iPhone. It will sport a decent size software based keyboard which will allow an external wireless touch-typing keyboard to be attached via USB or wireless. The onscreen keyboard will either disappear when not in use, or perhaps become translucent so the full screen can still be viewed when performing editing functions.

I think we can forget about handwriting recognition and thus pen-based tablet functionality. Like reading paper-based material, writing will also decrease in frequency (save for writing your signature on documents) and keyboard and gesture or touch screen operations will be the standard input method.

How else might an Apple tablet go beyond current tablet usage and delight endusers? (You know, speaking with my Windows/PC-using colleagues, I get the strangest looks when I mention “computing” and “delight” in the same sentence. My Apple using friends, especially recent switchers, just smile back at me, with the barest of winks or nods).

More rumours keep emerging that an Apple tablet will not be a computing platform as we know it, but will be a tool to further achieve Apple’s dual aims of furthering its chokehold on digital media and doing so in a magical, customer-delighting manner. Except for developers where I expect the same model of developer frustration will ensue, subject to FCC approval!

But what if a tablet could do double-time as a very fancy remote control and slide enhancer for Apple’s presentation software, Keynote? 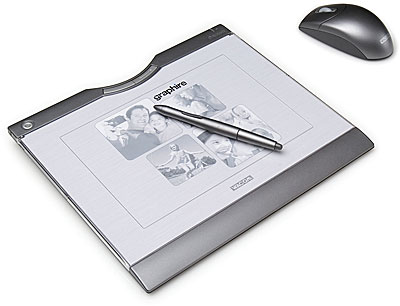 For some time, I have toyed with a Wacom Bluetooth tablet, now deleted from the current range of excellent tablets from this well-known manufacturer. I have used it to control slides, and use a mouse at long range in workshops. But as an annotation tool, to allow me to draw on the screen to provide live call outs, or underlines, or write in my own scrawl, it doesn’t succeed. While there’s third party software available, when in presenter mode, it’s just too difficult. Because you must look up at the screen to see what you’ve written or drawn, your attention moves from your audience to the screen – fine occasionally, but not something you want to make a habit of at the risk of losing audience connection. 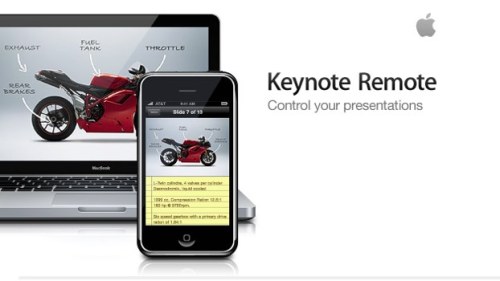 Already many people are using their iPhone/iPod Touches to control their slideshows, together with previews of upcoming slides, but that’s as far as their usefulness goes. What if the multi-talented tablet could also be used to contain the slideshow itself, to allow on-the-fly annotation of slides, to change them on the run (out of sight of the audience), to access the web or instant chat or Twitter/facebook, and perhaps raise presenting to another level professional presenters have yet to imagine? (Don’t worry about how the tablet connects to the data projector  – that will be the easiest part of the challenge).

As I have written elsewhere, and keep repeating, an increasing number of presentation attendees have tired of the tried, trusted yet ineffective method of presenting you’ll experience in 99% of presentations you can randomly download from the web, or see attending a workshop, conference, or inhouse seminar.

I’m not saying Keynote is the cure, and Powerpoint 2010’s developers have acknowledged this change themselves by emphasising their updated product’s “cinematic” qualities – albeit almost seven years after Steve Jobs used the same term when he introduced Keynote.

If the rumours are true we might only have to wait a month to find out if a tablet device truly is in Apple’s future. My hope is that with its possible release, Snow Leopard’s upping the ante with its new Quicktime and Core Video capacities, and possibly a Keynote updated to take advantage of these developments, those of us in the presentation marketplace will be thrown a challenge by Apple to upgrade our own skills. If I’m right, we’ll experience a paradigm shift in presentation giving. And it couldn’t come faster, thank you!

Learning from Skeptics to take your Keynote presentations to another level

I’m currently wrapping up a several month long project for my old college professor who first introduced me to the practice of psychotherapy using something called Rational Emotive Therapy (now called Rational Emotive Behaviour Therapy or REBT). When I first learnt it, it was but about 20 years old, and still acquiring evidence for its efficacy. Now it is one of the mainstays of modern therapy, one of the cognitive behaviour therapies much in vogue.

He approached me with the view to creating a set of materials to take into industry to assist adult workers improve their emotional resilience in the face of workplace anxiety and stress. He had already developed a successful worldwide program for K-12 students, and wanted something that would appeal to both Gen X and Gen Y employees. One thing he understood, having seen my recent Keynote presentations, was that he could not continue with the cognitive style of Powerpoint for these corporate sessions (Check the Powerpoint-based image in the link above).

Over several months, I’ve educated him in the Presentation Magic way of message delivery, such that he has shifted how he now conceives his ideas, and fights his own “tradition” of lots of words on slides. He knows this will no longer cut the mustard, and indeed by shifting his conceptualisations, he has also shifted his theorising somewhat. At first, it took quite some convincing for him to swing around, but now he’s the one who sends me pictures, images and concepts which better illustrate his ideas.

So, as we enter the “wrap up, final tweak” stages, my storytelling friend, Shawn Callahan, has sent me a heads-up for a wonderful video from the Richard Dawkins Foundation (RDF – no, not the reality distortion field) where Skeptics President, Michael Shermer, offers ways to see through baloney non-scientific explanations for events in the world around us.

The video, which you can see below on YouTube (don’t go there quite yet),  displays some wonderful means to convey several messages, using live action video, stills, cartoons, and animations. One day, I’m hoping all this (well, perhaps not the cartoons) could be reproduced in Keynote. 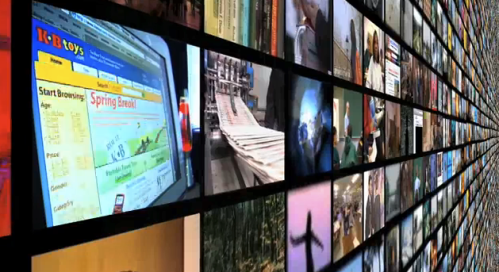 1. In particular, when you look at the video, note the opening scene with the multitude of screens, which then, about 28s in, brings up Michael Shermer, below, to introduce the video’s purpose. 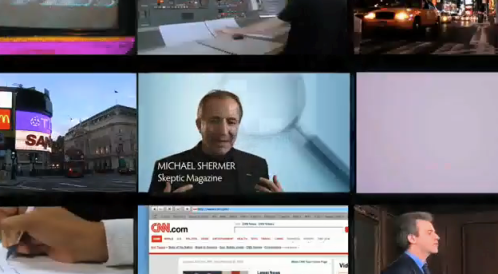 2. Then look at the scene at 40s where Shermer talks about visions in toast, and notice how his image has been alpha-masked so that the toast comes up behind his embedded video – can’t do that in Keynote at the moment, but fingers crosses that an updated Quicktime will allow some form of masking to occur. 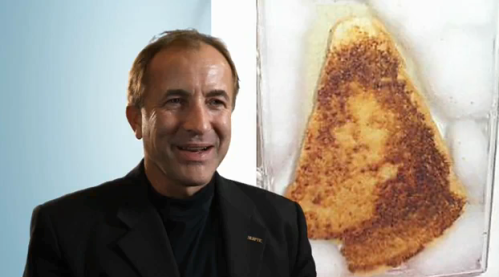 3. At 1m 24s, you’ll see an animation featuring an old-fashioned typewriter and lettering effects. The latter can be achieved in Keynote now, but the vertical swivelling of the image (around the Y axis) is something that would add much to Keynote’s capacities. Given what we’ve seen achieved in Keynote’s current transitions using Core Video, this build effect ought to be achievable, including the subtle spotlight feature. 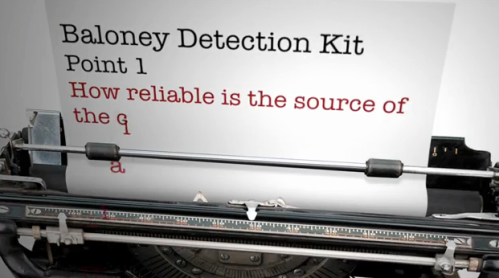 4. At 9m 11s, notice the document manipulation builds. This is one of the builds I’ve been trying to achieve in Keynote but it’s effortful. How nice it would be if this was a simple-to-effect build. It’s one of the areas of development I discussed with the Keynote team – to focus extra attention on document manipulation to add to the speaker’s authenticity – which I hope they follow through with.

Notice how effective the presentation video is, even if you may not agree with its premises. Look beyond that, and focus on the presentation’s production qualities and its effective use of visuals – not one bullet point in sight, and no chintzy clipart. The animations help add appeal otherwise the video might take a dour quality, leading to a turn-off factor.

Finally, here’s the video below. Enjoy!