Am I jumping late into the Apple tablet cheer squad? I don’t think so, nor would Cringely think it either…

Now that Steve Ballmer has undressed the HP “back to the future” tablet PC at CES last night, supposedly calling it a “slate” type device in an attempt to steal Apple’s forthcoming thunder, we can take a break from Apple tablet killer prognostications and review a little history. (PC World called the HP tablet “underwhelming”; The respected Tom’s hardware rated Ballmer’s keynote a “complete fizzle”.)

I strongly recall Steve Jobs showing an Indiana Jones “Raiders of the Lost Ark” film clip a few years ago in a keynote showing a new iPod which disappointed the punditry because it did not feature video. This was the October 26, 2004 “special music event” which saw the release of the U2 iPod, as well as the colour iPodPhoto. The clip itself was an Indiana Jones movie and featured Harrison Ford (Indiana Jones) and John Rhys-Davies (Sallah) looking at each other in close-up. Steve Jobs used it to say why Apple was introducing a photo-based iPod and not a video-based iPod as many had been hoping for… and had already been released in a rather clunky form-factor by Apple’s competitors.

The lines from Indiana Jones are (from IMDB.com):

[the old man reveals writing on the back of the medallion, which states that part of the staff must be removed]
Indiana: Balloq’s medallion only had writing on one side? You sure about that?
Sallah: Positive!
Indiana: Balloq’s staff is too long.
Indiana, Sallah: They’re digging in the wrong place!

By this, Jobs publicly offered that the world was not ready for a video-based iPod because taking and sharing photos was what the world wanted, and there was no suitable content for the iPod video. Not all agreed with him. What we later learnt was the subtext to this was that Apple was not yet ready to release such an iPod because the right deals with media producers (Hollywood film producers, as well as television series makers) hadn’t been concluded. Unlike Apple’s competitors who provided the means to (slowly) rip your own media onto a portable player (sourced from DVDs and VCR recordings – this was 2004, remember), Apple’s way was to do deals with the industries who made and controlled the distribution of quality video content. Your viewing of video on the iPod would be high quality commercial content done legally, not YouTube quality backyard wrestling, cats getting stuck in tissues boxes, or illegally ripped content.

Then  year later, deals in place and iTunes updated, the 5G video-enabled iPod was released.

Fast-forward a couple of years to Macworld 2008 for Jobs’ next misdirecting statement that clues us in, his famous “People don’t read books anymore” when discussing the release of the Amazon Kindle. Here’s how the New York Times’ Randall Stross wrote about it, January 27, 2008:

The Stross article went on to dismantle some of Jobs’ comments, but in a few weeks time we will once more discover how misdirecting Steve can be. Why? Because we are probably reading and writing more than ever before, if we include email and web-based work. In other words, there’s reading and then there’s reading. And Steve knows this.

What you will hear in the next few weeks, while those who had hoped for the Holy Grail of tablets to emerge from CES bear their disappointment, will be much “Apple didn’t invent it” invective. As if that should dismiss any entitlements Apple might have to develop something revolutionary.  As Jobs showed with the iPhone introduction three years ago, you introduce a new Apple product by taking the usual suspects lauded to be the best, fillet them by showing their weaknesses, and then not just close the gap, but leap passed it – even with your first attempt. And rather than put everything you’ve got into the initial product, bring it to market when it’s ready to do its job but not before. In the iPhone’s case, it started off fairly knobbled compared to the current 3GS version. But back then, AT&T certainly didn’t have the 3G bandwidth Jobs knew would be necessary to realise the iPhone’s full potential with the mobile Safari browser, and Apple was still to put in place its road map for independent developers of applications, now downloaded in the billions, and perhaps apart from its UI, the iPhone’s key advantage.

The same process has been applied, and will continue to be with the tablet. When detractors see it, many will feel underwhelmed by it given that it now rivals Moses’ tablets brought down from Mt. Sinai (as you can see below, originally containing 15 commandments on three tablets, but Moses was a bit of a klutz…) in comparison to the Jesus’ phone (odd public descriptions given Jobs’ Buddhist leanings… I imagine Britt Hume doesn’t buy Apple products).

So when Jobs speaks about “nobody reads books”, don’t confuse it with “reading”, because this is one thing the tablet will excel at it. Not just the hardware to aid your reading, but the source and content deals he has already stitched up, which we will see demonstrated and discussed by various media representatives on stage. If anything, the tablet will likely increase reading rates around the world by making it fun, with multimedia, instant access, and value-added. Encyclopaedic works will come alive, updated on a regular (no doubt subscription) basis in a way Microsoft’s Encarta tried but failed to do, ultimately thwarted by Google. More egg splattered.

Just imagine a child is reading a book on his tablet, comes across a word he doesn’t understand, and then through a series of clicks or swipes on the word, causes a balloon to pop up on screen. There, either a video recording of a person or perhaps just the words appear, giving the word’s meaning, origin, synonyms and pronunciation. (I use he because boys have more reading difficulties than girls). Reading becomes fun again for kids and their ability to spell enhanced. If the child grows tired, who’s to say another couple of swipes and the book is read to them. Just think of what occurred to Garageband at its last update when world-famous musicians and their tutorials were added to the application. Who’s to say if Apple has not done deals with the likes of Audible.com or other audiobook publishers, or even updated its speech synthesis capabilities to be more “natural” and less robotic, as with the iPod Shuffle 3rd gen.

I know that for some I may seem to be jumping late onto the bandwagon of cheering for a tablet, but you’d be very wrong. Let me refer you to a blog entry I wrote five years ago in December 2004. First some screen shots so you can see it for yourself, and a link here for the full article. 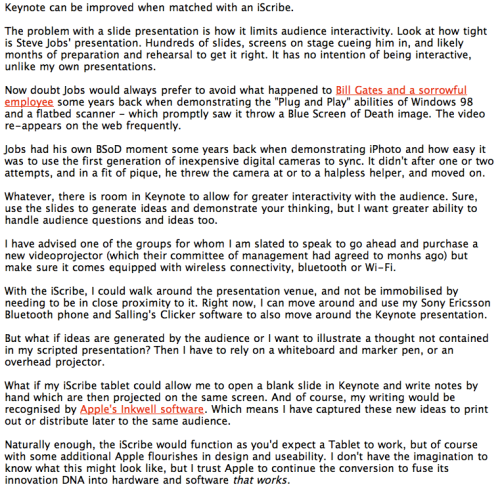 As it turns out, the name “iScribe” is used by a physician eprescription service for PDAs. And because of his dissing of reading books, I can’t see John Gruber’s suggestion Apple resurrects the iBook nomenclature coming true. Let’s wait and see.

This entry was posted in Presentation Skills. Bookmark the permalink.

3 responses to “Am I jumping late into the Apple tablet cheer squad? I don’t think so, nor would Cringely think it either…”