Forget an Apple tablet’s form factor – yeah, it’ll be stunning – it’s the apps that will be its ultimate success. Especially the ones that let you self-publish: 70% for you, 30% for Apple

Three years ago, speculation was rife that Apple would release a mobile phone at Macworld 2007. Apple kept shtum, admitting nothing publicly but as history now show, a chosen few got their hands on the iPhone ahead of its release under NDAs.

I wrote about it then on my now-orphaned Cyberpsych blog, not ready to accept it was actually coming, but predicting if it did arrive, it would contain all the hallmarks of Apple product design we’ve become familiar with over the years, especially since Jobs returned in 1997.

During December especially, with Macworld 2007 being the first week of the new year, the rumours and “confirmations” mounted daily, and now in 2010, in feels like deja vu all over again.

Another landmark product, which as Jobs showed with the iPhone gives Apple a further opportunity to introduce the next interface (r)evolution to the masses, is my prediction, despite commentaries asking why we need another tablet (Joe Wilcox, don’t hold Apple to Microsoft’s product standards and marketing).

If you’ve been watching Apple for the last decade or so, or at least kept up your observation at a distance of how Jobs operates, you’ll know his design mantra centres on bringing complex engineering feats within the reach of ordinary users who don’r need degrees in rocket science to manage. This kind of exactness of execution and attention to detail can’t be achieved at the cut throat prices Apple’s apparent competitors sell their wares for. I say apparent because Apple and say Dell or HP sell computers with much the same internals. Where they differ is:

For some people, price is all that counts, which is how Microsoft’s most recent advertising using “real” buyers pitched its cause, even acknowledging the coolness of Apple’s products. The coolness factor is meaningless for many, perhaps even a turn off, and as long as the specs. appear much the same, the experience ought to be as well, no?

Er, no. It’s like saying because two presenters use slideware their presentations will be equally satisfying or effective. As if.

So when it comes to an Apple tablet don’t expect just another interface that we’ve already experienced. It’s not the Jobs’ way. Whether it brings with it a new tactile feedback device for both keyboard and object manipulation – such as application “windows” , flicking pinballs in various games, underlining or highlighting words on a page, and turning that page or chapter with the flick of a finger or two which feels like a flick – it will likely exceed what we’ve seen in the iPhone. It gave us visual and auditory feedback, rather than haptic as has been mooted for the tablet.

But if history is to repeat itself – yes, early adopters will pay a special Apple tax – it won’t be the design alone that will win hearts and minds, and have competitors scratching their heads dreaming of counterattacks (apart from suing Apple for alleged patent infringement). As we saw with the iPhone, it’ll be the software. Not just the operating system software, perhaps iPhone OS 4.0, but what the software will allow in terms of Apps. I fully expect a chosen few app. developers will demonstrate their special versions of existing iPhone apps. as well as new ones specifically designed for the tablet. And I further expect companies fully immersed in the enterprise setting in a very big way to show both hardware and software developments which could only be constructed for the tablet. I’m thinking here of medical applications, already utilising tablet configurations for data storage, but which will really come of age with the Apple tablet’s OS and feature set.

I have no insider information, but I will not be surprised if Apple released its own homebrew set of apps for the creative set, in particular versions of iLife and iWork which will enable users to create endproducts which will somehow be compatible with desktop versions of iLife/iWork.

Let’s think of Pages for a moment, with its dual functions as word processing and desktop publisher. What if Apple provided you with all the necessary tools to create your own book, upload it to the new version of iTunes which will be released the same day as the tablet, and be a saleable item – yep, Apple takes 30%, you get 70%.

Talk about cutting out the middle man, the publishers of expensive textbooks, magazines, and novels! There may be a new industry of for-hire editors to help shape it up, deals with sites like iStockphoto to enable you to fill your book with royalty-paid illustrations (or perhaps help you find specialist illustrators who can also show their wares on a new iTunes store), and even the opportunity to add music to your publication from the iTunes store. Apple will take of royalties for the music publisher in one easy and attractive arrangement.

With respect to Pages’ older brother, Keynote, I have some time back (May, 2007) written of what might happen if your Keynotes could be uploaded to the iTunes store. 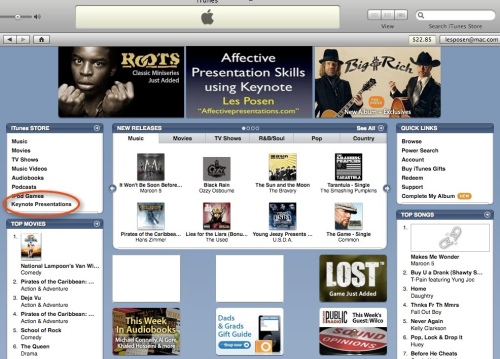 Again, a place to show your wares, but it seems iTunes U has to some extent executed this vision by using Quicktime movies exported from Keynote rather than raw Keynote files to provide the educational material. Given the possibility that the next version of Keynote may well be Snow Leopard-only, it’s hard to see how a tablet could create Keynote files to be imported into the desktop version.

That’s not to say a tablet couldn’t be integrated with the management of regular Keynote files, much like the iPhone can in a rudimentary fashion. But rather than just control the slides forward and back, why not call up each slide at will while they’re laid out in order on the tablet, big enough to identify. Stacks of slides that go together, which can be organised in Keynote now, would take care of huge numbers of slides in a stack. And going beyond that, as I have suggested elsewhere on this blog, why not use the tablet to live annotate your Keynotes, even monitoring Twitter feedback during your presentation which is becoming a popular conference activity. This already occurs with tablet-based Powerpoint for Windows.

So, to all those focussed on the hardware aspects of the tablet, don’t forget how after the excitement of the iPhone form factor, it was the app store that provides for its clear lead over its competitors (who will ever catch up with 100,000+ apps?).

I have no doubt that while we swoon over a tablet’s form factor in late January, it will be its software, interface and ability to disintermediate the current publishing houses that will be its permanent “of course, why didn’t I see it coming” factors. It won’t happen first, because for the tablet to succeed it will provide for the same publication houses to sell their wares. But as the music recording industry discovered when they allowed iTunes for the Mac to come to market, in a few years, self-publishing via the tablet will have them asking if they made a deal with the devil, which is where the details will be.

Oh, and one more thing… just as with the iPod and the iPhone, watch the detractors leap on it, disappointed the tablet doesn’t also make toast. The usual suspects will also emerge without the wit or elan to actually commend Apple on shifting the digital world forward incrementally. Don’t worry, that’s their job… someone’s got to do it.