Two thoughts on the Apple’s Education Event in NYC: Its presentation software, Keynote is alive and well and expected to prosper, and Android-based tablets are dead in the water in the K-12 education domain.

This morning I woke early early to attend the Channel 7 Melbourne studios for an interview on its morning program, Sunrise. The topic was the virtual site, Second Life, which had apparently been mentioned in the midst of some controversy in a Sydney-based morning radio show.

As so often happens, television picked up on it and I was rung by a producer to offer comments as a media psychologist. You can read something about what happened at this link here from the Metaverse Journal website. A video of my interview is below:

After that breakfast, a brutal workshop with a personal trainer (2012 resolution in action), it was time to settle back to watch the Apple Education Event whose details I had been avoiding all morning. That’s been my habit these past few years: avoiding another’s opinions and perceptions of Apple keynotes, and trusting my own reactions first.

In my previous post (scroll down), I had made some predictions as to what we might see announced, and I was particularly interested to see the fate of Keynote and Pages – indeed, iWork in general – should Apple roll out an iTunes Scholar app (called iTunes U in the event) as well as an book authoring tool, whether it be a beefed up Pages or a new app entirely.

As it turned out, it was both. Yes, a new app called iTunes Author but with an exceptionally close resemblance to Pages.

But my heart was gladdened, having been buoyed by learning iWork’s VP Roger Rosner had been seconded to the iBooks team, when I saw how Keynote was integrated into the iBooks Author workflow, something I had discussed in my earlier blog post.

While neither it nor Pages received published updates, it’s clear to me they will, given iBooks Author is only in version 1.0. As Apple watchers know, such versions are quite acceptable as they are for initial versions – very functional with great ease of use based on familiarity with other Apple apps. There are clear omissions which some with a predilection to diss all things Apple will seize upon, but again long term Apple observers know they will eat their words and look sheepish when V 1.5 then V 2.0 rolls out in a few months.

Witness the same thing when Keynote 1.0 for the iPad was released. Now it is a very competent app., and I expect even more feature matching (with desktop Keynote 5) when the iPad 3 is released soon with its beefier CPU and graphics.

So, with my worst fears that Keynote was to be orphaned not realised and indeed almost a centre of attention with its place in the iBooks Author workflow and feature set, I could concentrate on the event’s central message: Apple is about the inovation experience, supported by its hardware.

In returning to its educational roots, Apple once more puts itself forward as a technology company that can do it all, supplying hardware, software and content for a specialised cohort in real need of innovation.

All the time I was watching this trifecta in action, I kept thinking how any Android-based tablet maker is going to make any headway into the K-12 marketplace. Yes, I expect to hear many complaints not merely of an Apple walled-garden but such a severe lock-in as to call it a moat. Especially with respect to exclusivity of iBooks Authored works being sold only within the iBooks store. Of course, if you repackage the contents for another ePub service using other publishing/creation tools, Apple has no lock on you. Perhaps that other service does. So it seems to me Apple is applying the same prohibitions and permissions as it does for apps you create using its proprietary coding. Yes, you might create the images in Photoshop and the words in MS Word, but if you lay it out and include iBooks Author’s wrapping to publish it, yep, it’s exclusive to Apple. The content and IP is still your’s; how and where you choose to create and publish the final work is your choice.

The lock in to iPads has some arguing families will not be able to afford iPads. These are fair criticisms, but if we wait a little longer, let’s see the price of an iPad 2 when the iPad 3 is released. It’s made its moolah for Apple, and perhaps will be reduced to a more affordable $399 or even a version for $299. Do kids spend this much on Nike sneakers nowadays?

So Android-based tablets might be cheaper or even preferred by those filled with anti-Apple sentiments, but where’s the content? Apple seems to have sewn up those educational textbook makers who in the USA control 90% of the market, according to figures shown at the Apple Education event.

Where do Android-based tablets go in this marketplace? Nowhere, I think, perhaps left to focus on the enterprise setting. But if you were Toshiba or ASUS or Acer or even Microsoft, you’d be worried that children in Kindergarten are being exposed to Apple’s iPad economy, and they will accept the iPad form factor as the norm for “computing”. I put this in quotes because I’m trying to think of another term these children will use as they grow up, because it’s not the computer their parents have known to be a computer.

And you know what? Those kids won’t care. It’ll be called an iPad. That’s sufficient.

[UPDATE: I have added the Sunrise TV video from YouTube, corrected some of the spelling errors from commenters, and in gratitude, include this cartoon:] 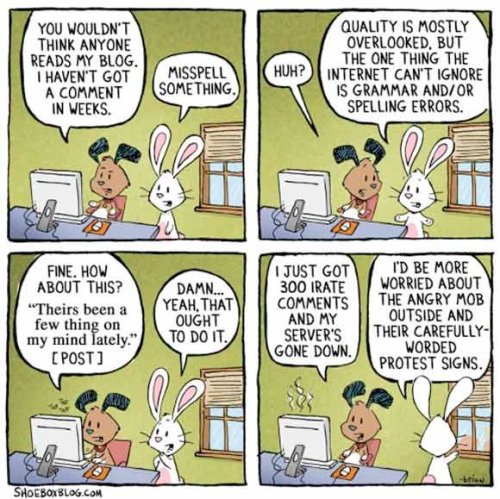 This entry was posted in iPad, iWork, tablet. Bookmark the permalink.

6 responses to “Two thoughts on the Apple’s Education Event in NYC: Its presentation software, Keynote is alive and well and expected to prosper, and Android-based tablets are dead in the water in the K-12 education domain.”