What if Dragon scaled their free iPhone/Pod Touch Search and Dictate apps for the Apple tablet? Joining the dots…

Over the weekend, I noticed almost a dozen application updates waiting for me in the iTunes App store for my iPhone 3G.

Two of those were from Dragon, firstly its Dragon Search App (below): 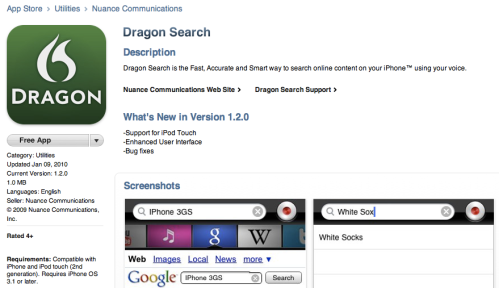 and also for its Dictate App. (below):

The two key improvement cited for both were: Support for the iPod Touch, and Enhanced user interface.

Let’s connect some dots. Imagining the the Apple tablet runs a version of the iPod OS (4.0 or a modified version), what’s to say that Dragon’s highly rated and free apps can’t be scaled for use in a tablet form factor. So along with a revolutionary user interface (I am listening to Steve Jobs in my head using the same words he employed at the iPhone release three years ago), might there be an optional voice-controlled dictation and search function from Dragon?

And extend it a little further, and have Dragon’s software also control operating the tablet (“Open Mail; new entry…”) something I can already do with MacSpeech Dictate for my Macbook Pro, along with a bluetooth headset which does double time linked to MacSpeech, and my iPhone currently (but not simultaneously). Macspeech is based on Dragon’s Naturally Speaking engine, well established in the Windows world. I’ve been using it with the Plantronics Bluetooth headset and it’s very accurate out of the box.

The question would be whether a built-in microphone would be up to the job, or if you’d have to don a headset to perform all the functions. But if the iPhone’s built-in microphone can do the job well enough (the Dragon iPhone/iPod software gets very high ratings) then perhaps that problem has already been solved.

Also remember that Apple has a dedicated speech recognition and synthesis research lab which has had input into Macs for a decade as well as the iPhone since its release, and you have a few more dots to connect.

It doesn’t have t be necessarily an either/or case for the tablet. Why not have both forms of input, touch and voice) as you can now for any Mac. Speech recognition will have huge benefits for certain professions, such as the health sciences, for those who cannot use keyboards or complicated finger-based controls, the commercial aviation industry who could bring up all their Jeppeson maps, and of course students from late elementary school through to graduate school (where texts and lectures will already be carried on the tablet).

Keeps getting more interesting, isn’t it…?

This entry was posted in Presentation Skills. Bookmark the permalink.

9 responses to “What if Dragon scaled their free iPhone/Pod Touch Search and Dictate apps for the Apple tablet? Joining the dots…”