Each Apple keynote, such as the one delivered last week showing new MacBooks and the AppleWatch, brings with it much excitement and anticipation from a variety of audiences.

Tim Cook, as the Ringleader corralling the variety of speakers – some from within Apple, others from associated companies displaying their wares – likely has the final say over the form of the keynote, having perhaps learnt at the feet of keynotemeister, Steve Jobs.

I don’t think it’s my imagination but I do believe since he began this central role some keynotes ago when he formally became CEO (not just Jobs’ interim stand-in), Tim’s presentation style and confidence has vastly improved.

I no longer cringe at what appears to be his earnest but seemingly inauthentic speech patterns. He truly seems to have come into his own and is really enjoying his role of ringleader in what can often turn out to be a three-ring circus of various product displays during the keynote.

The challenge he has is recognising how to deal with the variety of audiences Apple keynotes attract.

Thinking about who your audience comprises is one of the things I speak of consistently during my workshops. Audiences for Apple’s keynotes are diverse. From investors and shareholders, through to its own employees – maybe learning of Apple’s products for the first time such is the secrecy within the Apple campus – and then going on to the general public, the enterprise, education, religious organisations and perhaps a never-ending list of Apple users and non-users alike.

There is of course another audience – Apple’s competitors for whom Apple once displayed a “Redmond, start your photocopiers” banner in the Moscone centre during one Macworld Expo introducing OS X Tiger.  Now it would likely to be: “Seoul, start your 3D printers”. 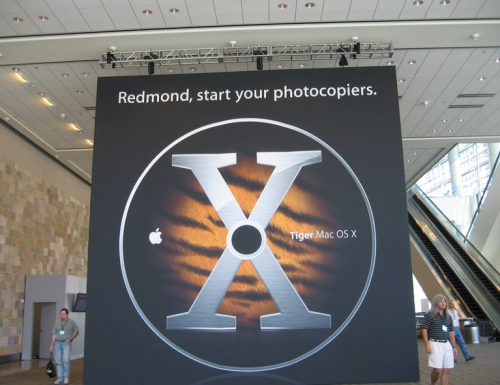 There is perhaps one other group for whom Tim and his presenting team give little consideration.

There is a group of people, like you have come to this website, who consistently look at these keynotes for indications of where Apple’s flagship presentation software, Keynote, may be going. It is here that we see Apple’s live beta testing of new features it is considering for the next upgrade to Keynote.

At its introduction at Macworld in 2003, Steve Jobs famously said that he was Keynote’s main beta tester before its release as a stand-alone $99 product for the public to buy. (Those 5000 attendees at the 2003 keynote were lucky enough to get a free copy, plus a free iSight firewire camera). So, each keynote, a group of Apple Keynote users carefully follows the presentation,  not just for the content, but for the process of delivering the content.

What’s become clear since Tim took over has been the space and time given over to high production value movies inserted into the keynote. That’s because the processes of manufacture that Apple is now employing are so complex words alone are insufficient and if a picture tells a thousand words then the movie tells 100,000 words.

No doubt, as you continue to go to others’ presentations and perhaps give them too, you will see more and more people inserting movies, and I do believe there’s a fine line to be drawn between just enough and going overboard.

I also believe Apple has begun including more animations, not necessarily those deliverable by Keynote, in its efforts to best illustrate the workings and philosophy of its products.

In this blog entry, I want to focus on a text insertion method I have been employing for a number of years, but which I saw included in last week’s keynote, perhaps for the first time, but for once in very clear view.

It’s featured in what was a surprise inclusion that none of the rumour sites picked up on.

Yet it received almost universal acclaim from websites, developers and of course the medical community. I’m speaking of Researchkit, and new relationships Apple has forged with a number of international research institutes investigating some of the world’s most pressing chronic health issues. Perhaps the icing on the cake was that Researchkit was also to go open source and not be restricted in the long term to Apple devices.

Tim Cook himself did not do the Researchkit demonstration, but left it to senior vice president of operations Jeff Williams. If Jeff has done a previous Apple keynote, I can’t recall, and a few people have suggested his presentation lacked polish.

That seemed to make no difference at all to most in the audience who grasped almost immediately the importance of Researchkit. For many, it would have been an example of how Apple can use its technology muscle to give back to the world.

Jeff had three main points he wished to make. He could have used a tried-and-true bullet point method, as most other presenters would have. But instead he chose to use some animations to bring in each point as a stand-alone message. I have used the same technique in many of my own presentations for the last couple of years, so it was great to see it validated in an Apple keynote.

I’ve taken a section featuring Jeff from the keynote, and I’m going to show you how I can reproduce it so that you too may include it should you find a practical reason to do so. It’s one of a number of ways to bring text onto a slide in a meaningful way, rather than simply select text on the slide and work your way down a bulleted list.

I have converted the MP4 video from Apple’s own podcast into a GIF which will replay over and over again, so you get an idea of what we’re trying to do here.

It starts with Jeff, to the right, and the research kit logo centre screen. The logo then moves to the left, leaving “white space” for the text to fill.

As you can see, the entry and exit of the three sentences are done by a cube animation. We first saw such an animation highlighted as a slide transition when Jobs first introduced keynote more than a decade ago, and I recall thinking to myself when I saw it, that this was not your father’s PowerPoint.

In later versions of the cube slide transition – now available but poorly rendered in PowerPoint, and perhaps now overused in Keynote – the effect has been applied to text and object rendering within a slide (cf. transiting between slides).

Rather than use the blog entry here to describe what I did to replicate Jeff’s  keynote, I created a YouTube video walking you through the various steps I took so you can follow along and stop it where you need,  while you duplicate what I’m doing in your own Keynote file.